Dhaka used to be a city of mosques, today it can be called a city of restaurants. You can now find any cuisines in Dhaka, from Authentic Chinese to Hakka Chinese to traditional Bangla Chinese, Lebanese, Turkish, Japanese, Korean, Sri Lankan, Indian and many many more. So I decided to start writing some reviews on these restaurants.

Recently I visited this new restaurant at Satmasjid Road named PAPRIKA with a friend.It is opposite to American Burger and on the 1st floor of the building which houses Bengal Meat downstairs. It’s a neat location and should get a lot of university crowd. The interior is very neat with very well decorated walls and ceilings and also the tables are chairs are very comfortably spread with ample space to walk around. The kitchen is behind a glass barrier and you can see the chefs at work which is again a neat touch.

The most important aspect is of course the taste of the food. We ordered a Chicken Cashew Nut Salad and Grilled Prawns with 2 separate drinks. Food was served within 15 minutes but oddly drinks were served after the food. For me it is not much of an issue, but it can be for others.

The cashew nut salad had pretty generous portions and for 250 a plate I would be happy to have it again. There were plenty of chicken and cashew nuts for both of us and the flavor was also okay. Given the price, it is the probably the best I had in Dhaka. Although they used sliced cucumbers inside the salad which I found a little odd.

The prawns were also served in a beautiful plate and they looked very appetizing. The sauce that came with the grilled prawns was strong but it tasted great. The flavors were spot on and it did not overpower the freshness of the prawns which I thought is very rare in Dhaka. As for the drinks I am not sure what they were called but they were pretty refreshing and tasted good.

Overall I liked the place because of its ambiance and the presentation of the food. The restaurant also scores very high in Value for Money segment. Food and Drinks cost us 950 taka with VAT, so I am very happy with the deal. It will be interesting to see whether they can continue giving these kind of portions at this price. I will be more than happy to return again to check out other items.

I had a night to burn in Bangkok and was wondering what to do, normally you would think Khaosan Road or a walk around Central World, but I decided to find a good place for Pad Thai. With a little help from Google, I found a place called Thip Samai, which apparently sells the best Pad Thai in Bangkok. So I took a screenshot of the address and hopped on a Tuk Tuk. I wasn’t sure whether Tuk Tuk guy would know the place, but as soon as I said Maha Chai Road, he asked, “Pad Thai?”

It took around 20 minutes from Sukhumbhit Road and as soon as I got there, I saw this huge queue outside. I was maybe 20th in line and outside the restaurant it was like a production line of Pad Thai. They are making nearly 20 plates every 5 minutes! 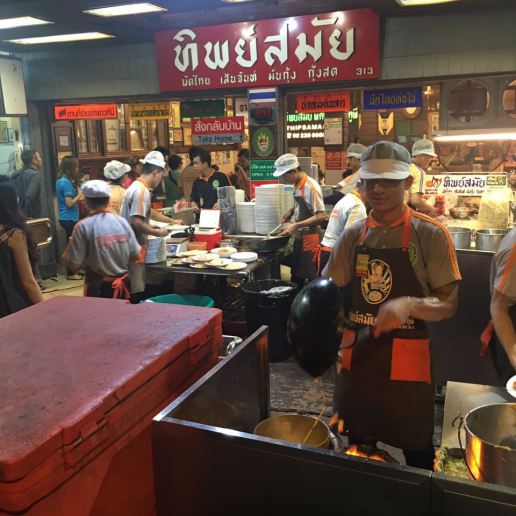 Within 10 minutes I was able to enter and after asking for a table for 1, they asked whether I wanted Air-Conditioned room for 10 Baht fee! With queues like that I could not blame them either.

I am glad I agreed, because the inside part was beautifully decorated. The tables were laid out in a neat way and the ceiling was decorated. The walls were also full of different framed pictures of News Paper Articles or Awards for the apparent amazing Pad Thai they sell. 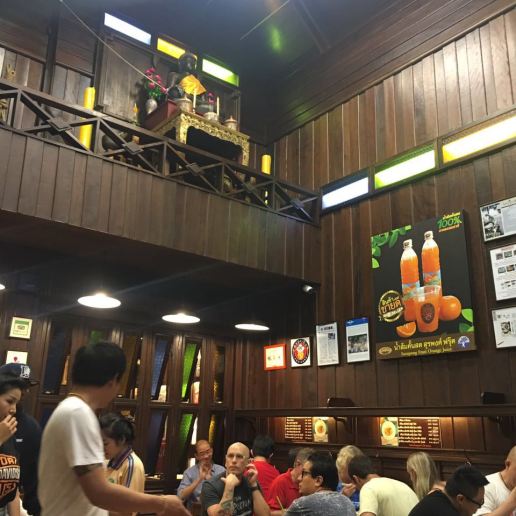 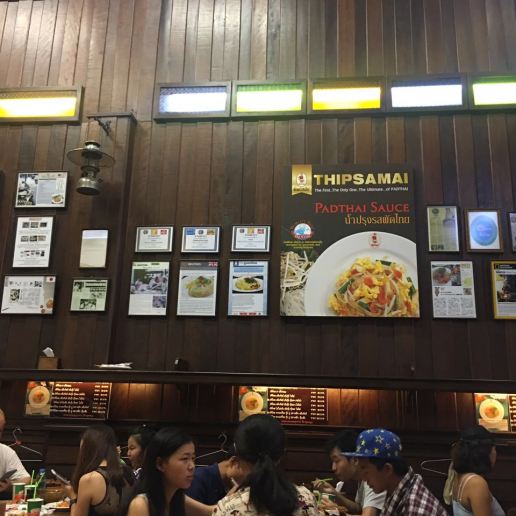 The waiter was quick to handle me the menu and it was the most helpful menu I have ever seen. They sell very few items here and ones which are the most popular are also clearly marked. So I ordered one Egg Wrapped Pad Thai with Large Fresh Prawns, one Orange Juice and one coconut ice drink type something. I was a little worried about the items being halal or not, but it turns out they cook in shrimp oil and I didn’t find pork on the menu either. So for folks who are serious about halal food, can try out this too. (Still check before you eat, I am not giving guarantees.)

I simply loved the inner atmosphere. There also 4-5 types of condiments on the table, dried chili, fish sauce, salt, pepper, etc. The food also came within 5 mins, first they served the coconut dessert for a weird reason, and very soon was followed by orange juice. It came in a sealed bottle, as soon I took a sip I was taken aback. I have never drank orange juice that had so much flavour in it, it tasted better than an actual orange!  My Pad Thai also came arrived very quickly, it looked beautiful with red capsicum and parsley on top. I dug in quickly with my chopsticks and my first reaction was that it was a little sweet, but luckily there were the condiments, a little pinch of chili, splash of fish sauce and a squabble of lime and all of a sudden I am eating the best Pad Thai ever! 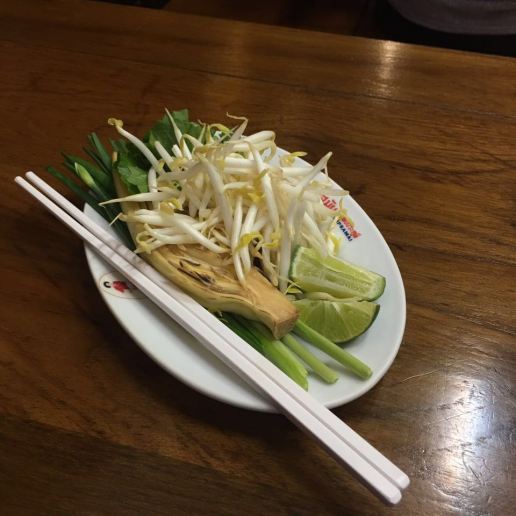 It wasn’t only the taste of the food, I found what was making my meal so special was the whole atmosphere. The waiting outside, beautiful decoration inside, the orange juice, the condiments, the buzz of so many tourists, it was just a perfect dinner. The Pad Thai itself had plenty of flavours which unfortunately I am not an expert of. I found 2 big sized prawns and that’s all I cared about. I was quick to finish my dish and was wondering whether to reorder but after looking at my ice coconut dessert, I decided against it. It was a simple yet tasty dessert and I was chewing the crushed iced coconut with glee.

The total bill of the dinner was 225 Baht! Although it cost me 400 baht to go and return from this place, I am not one to complain. If anyone is planning to taste authentic Pad Thai in Bangkok, Thip Samai is definitely the place to go!